Productive procrastination, and a contest!

I'm getting a lot of hits on last week's post about procrastination , so I thought I'd share a little more about the technique I'm most fond of right now.

There's a lot of talk in productivity circles lately about "productive procrastination," which basically just means that you stall on one task by working on something else instead. There's a new book out called The Art of Procrastination (not one of mine), which offers some clever advice on this tactic. It's worth checking out, if procrastination is something that you struggle with.

My personal favorite system at the moment is called the Autofocus System (PDF link), in which you basically write up one very long to-do list, and then when it's time to start a new task, you scan the list for something that appeals to you. You work on that task for as long as you feel like, then cross it off the list and, if it's not complete, write it again at the bottom of the list. Just making progress on something is often enough to break my procrastination streak. I find that when I'm using the system diligently, I really do get a lot more done.

But how, you may ask, does this work for writers? Shouldn't there be only one item on your list:
"write the &*^%&* book?"

Well, yes and no. I think any large task (like, uh, a manuscript) is made up of smaller tasks (this is the wisdom of David Allen's bestselling Getting Things Done), and those smaller tasks tend to feel a lot less daunting, especially if you can break them into pieces that you know how to tackle.

How about a novel set in the American Civil War, as an example? This author's list might include:
-research Confederate soldiers' rations in 1864
-brainstorm plot arc for [secondary character]
-revise opening scene to put us more in [protagonist]'s head
-select an excerpt to take to critique group this week
-do a book map of Cold Mountain to analyze story structure
-consult a linguist about rural West Virginia dialect

And so on. Do you see how much more manageable each of those items looks than "write a novel about the American Civil War?" Completing this list is not the same as finishing the novel, true, but it's quite a bit of progress in the right direction, and sometimes that's enough.


It's been way too long since we've had a CONTEST, so let's do this. At BEA this year I picked up a great promo item from the publisher of The Art of Procrastination: a "to-do list for procrastinators." Look! 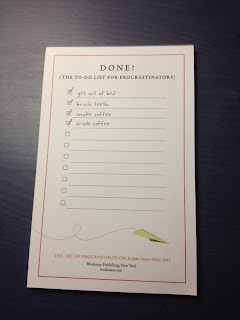 So leave me a comment on this post with your best-ever tip on how to beat procrastination, no later than Friday, October 5, and I'll  pick my favorite. If yours is the best tip, I'll send you the notepad and feature your suggestion in a future post. Enter as often as you like.

Posted by Courtney Miller-Callihan at 6:30 AM

I don't know that this is an amazing secret tip or anything... but my way of avoiding procrastination is similar to what you just mentioned above. I have a list of projects lined up. If I feel "stuck" on something, then rather than sit and wait for inspiration to hit, I move on to the next thing on the list. Usually once I've let the "stuck" thing sit for a while it will come unstuck all by itself.

In terms of writing, this means never getting writer's block. If you aren't making progress on a project (or even just a certain aspect of the project) then make good use of your time by getting something else done. Move on to another story for a day or so until something gets jarred loose and you can come back to what you were working on. I've found this to be very effective when I feel like I'm losing momentum on a project.

This isn't likely to be much help to anyone else, as it's me-specific. I'm generally not a big procrastinator. When I find myself getting sucked into the internet, it's usually a sign that I need a break from the computer.

So...I move away from the desk. I try to go outside to do whatever it is that is next on my list - usually pretty easy, as long as the weather cooperates. If I'm writing, I move to pen and paper rather than computer.

Sunshine and fresh air are the best anti-procrastination tools for me!

I find that the possibility of a reward is what keeps me going when things aren't moving as fast as I'd like them to. For example, some weeks I might tell myself, "If you write 1000 words this week, on Saturday you may have a banana split." The idea of a reward is a big incentive to make progress (as evidenced by the fact that I pretty much jumped to make this comment when I read that I might win something...)

That's tip #1. Something that goes along with incentive, but can be used separately, is tip #2: Get a motivational partner.

Mine is my husband. At times, the mere thought of not living up to my own standards makes me think I will disappoint him, too. And then I write! But there are times when he sees I need a little something extra, and he'll offer me a morning to myself (meaning, no childcare responsibilities) if I write a set number of words or do an outline for a book.

And on the flip side, he can also give me a punishment if I fail to achieve my goal, which is that he gets the morning off! With three kids ranging in age from one year to seven years, that usually has me overachieving. :-)

Procrastination isn't a problem for me. But I notice that authors & agents talk about it on Twitter and Blogs. I just checked an Australian blog (I have a version of my novel set in Australia) with a similar topic: Time management for authors. You might want to look at Clancytales.blogspot.com.au No tip from me, so best wishes to the others to win.

Sometimes...you just have to procrastinate. So my tip: let yourself procrastinate. Everything in moderation, of course. It's like letting the brain exhale a tiny bit before the real work begins. Allow yourself to have a little bit of time whenever you feel like it. Set a timer. Make a few hard and fast rules (ONE blog post and FIVE minutes on shoedazzle and then it's time to work.) Stick to your own rules, though. A good friend of mine
always says "pay yourself FIRST", and I think it's a good way to look at things. It's kind of the reverse of rewarding yourself after the work is done :). AND...sometimes these little "brain exhales" can lead you somewhere serendipitous and point you toward something you never would have found if you didn't give yourself permission to wander in the first place!

One thing I do is put together a 'sample cover' for the book I'm writing. When I look at it, it reminds me of my bigger goal and dream, and I am once again inspired to write. I also put a gold sticker on it that says "New York Best Seller" ;)

I trick myself by promising myself I'll only have to write actual words for fifteen minutes, and then I'm done. I vow I will get up and do something else as long as my butt is in the chair and my hands are on the keyboard for 15 minutes.

Hours later, it's 2am and I'm stumbling to bed with another chapter written :) Once I get sucked into a world I created, I don't usually want to leave!

Otherwise known as "Ass in Seat"

Otherwise known as "Sit down and don't get up until you've completed what you sat down to do."

I use it to tell myself that I can't get up from my seat until I've accomplished a non-shameworthy amount of writing. And, since I'm a top-totch procrastinator, I can assure you it works!

*Though I've changed the concept to suit my lazy ways, the phrase A-I-S originally comes from an episode of "Everyone Loves Raymond". Raymond's dad uses it to refer to the concept of everyone needs to be somewhere at a certain time or they get left behind. "We're leaving at 10:00 so everyone better be A-I-S or you're getting left."

I highly recommend watching the episode, because it's also the one where Debra gets a curling iron stuck in her hair.

Here's what I do: have more to-do list than time, so that whenever you have a free minute, you rush to fill it.

Though if you can find a way to have more time than you need for the things you have to do, I would choose that over my method any day!

Courtney Miller-Callihan
I'm a literary agent with Sanford J. Greenburger Associates. All opinions stated are solely my own.